I tuned into BT this morning (Breakfast Television for those of you reading this who aren’t from Ontario, Canada) to see how the Raptors made out last night. I’m not a huge basketball fan but when our country has made it this far into the finals, you gotta jump on the bandwagon.

When I heard Dina Pugliese mention that Richard Branson was about to make a huge announcement on the next segment, I said to my husband, “I wonder what he’s doing in Toronto?”. Turns out he was announcing, or rather introducing, the captain of his new cruise ship – a female, and a Canadian! Both very cool, in my opinion.

What I Knew About Richard Branson Before Watching Him On BT

Make that three. I know he owns Virgin. That’s really all I know about the man. I don’t even know what Virgin is aside from a mobile company and a cruise ship line. This blog isn’t about what he’s known for, or at least, what I know about him. It’s about the amazing fact I discovered about him this morning, and then confirmed with a quick google search.

Within the first two seconds of watching the interview on BT this morning, his body language conveyed something astounding about him.

What Sir Richard and I Have in Common

“OMG, He’s an introvert!” I blurted out to no one in particular, although my husband was right beside me. 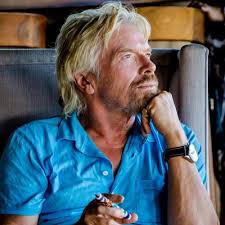 Why was I shocked by this revelation?

I would never have expected someone of his fame, fortune and sheer genius to be an innie like me. Although, now that I think about it, many visionaries are indeed introverts.  We’re naturally inclined to spend much time of our time in our head imagining, daydreaming and often catastrophizing. When I went back and watched the video again while writing this blog, I saw that he evens talks about being 27 and envisioning a cruise line for 30 year olds. As the years passed, the age increased as he joked about, but he’s making it happen. Talk about the power of visualization! Clearly Sir Richard has harnessed the power of his imagination for the good.

As a proud introvert, I’m aware of a handful of famous people that share this personality trait and I’m always pleasantly surprised to find living examples of people who appear to live in the limelight but actually reside in the quiet of an introverted world.

If you’ve read this far, you’re likely asking, “OK Jen, so what did you see?” Well, I’m glad you asked. There were a couple of dead giveaways and this is precisely why I geek out on body language science and the human behaviour behind it. Especially when it comes to introverts because I know the struggle.

Why He’s My New Favourite Person

The moment I realized that he was an introvert, my heart lept with joy. Sounds cheesy but it’s totally true.

To see a man of his fame and fortune show the world that he’s indeed just like the rest of us makes my heart smile. He’s an inspiration to millions and which will now include a collective of introverts who dream the way he does, but didn’t believe they could accomplish what he has, until the moment they saw this interview.

For all of my fellow innies, I raise my coffee cup to you, and in the name of Sir Richard Branson, for inspiring those of us struggling to make our way in the extroverted world we live in.